While I’m of the opinion that you really can’t go wrong choosing a first Austen because all six novels are splendid, I do think there’s an ideal order for most new readers to discover Austen’s novels. So at the risk of sounding terribly bossy here’s the right way–okay, okay! A good way–to start off your love affair with Jane Austen’s brilliant works:

The last three novels I listed are Austen’s more melancholy works and I think they’re best appreciated after tackling her more light-hearted novels. That’s not to say that there aren’t serious themes in the first three I listed, but the last three have a very different feel. I think the biggest pitfall when beginning Austen (especially if you’re not in the habit of reading classics with more antiquated style and language) is to miss the HUMOR. Austen is funny. And if you can’t recognize the humor, you miss out.

Pride and Prejudice is the perfect novel to begin with because it’s so accessible, and the hilarity comes across clearly even to modern readers. Mansfield Park’s Mr. Rushworth has me in stitches every time, but if I’d read MP first, would I have picked up on it? Perhaps not.

So start with P&P. It’s practically perfect in every way. You will laugh out loud. You will fall in love. It will be glorious. Emma is a great follow-up to P&P. While Elizabeth Bennet’s flaws can be endearing, Emma has haters. She’s a very different kind of protagonist and many find her hard to love. I have a lot in common with Emma (which is why I hated to sort her into Slytherin, but it had to be). But it can’t be denied that she has a lot of maturing to do in the novel. In P&P things are happening to the Bennet family, but in Emma, Emma is calling many of the shots (with disastrous results). It’s a funny novel with lovable townspeople (a must!) and arguably THE BEST Austen hero of them all–Mr. Knightley. And by arguably, I mean, I will argue with anyone who disagrees with me on this. I’ve placed Northanger Abbey after P&P and Emma, but before the more serious novels because while it’s comical and light-hearted, it’s in many ways the odd one out. Unlike the other novels, this one is a parody of gothic romances. It’s delightful and charming, but due to the fact that it’s a parody,  it’s just not on the same level as the other novels. I think most people should read NA after falling in love with Austen. But don’t read it last because it would be a little bit of a letdown after the other novels!

Caveat: Catherine Morland, the protagonist, is seventeen and such a teenage girl. If you’re trying to introduce Austen to a younger audience, NA might be a fun way to begin. But some understanding of gothic novels is a must before beginning, otherwise the jokes won’t be as funny! And so much of the plot would just seem….weird. How I love this one! Sometimes I think it’s my favorite of all. In some ways, Sense and Sensibility is a sister novel to P&P. The plot is a little bit similar (two sisters in financial distress and in need of good marriages), but it’s carried out in a way that’s all its own. Elinor and Marianna are very different characters from P&P‘s Elizabeth and Jane and their situation feels more tragic. S&S is more dramatic (seduction! Almost dying of a broken heart!) than the first three novels on the list. It’s the perfect gateway book into the second half of the list. This one is a strong competitor against Northanger Abbey for the Odd One Out Award. This one is brilliant, but I wouldn’t recommend starting your Austen journey with Mansfield Park. And you might not want it to end with it because it’s such a melancholy book.

Fanny, the protagonist, is wildly different from the other Austen heroines. It’s a long read with themes that aren’t touched on as much in the other novels: education and piety. And it has the most vile character in all of Austen (Mrs. Norris). It’s also probably the most underrated of all Austen’s works. You probably won’t love it as much as you should, but it’ll grow on you, I promise. FANNY4EVER. (And maybe someday we can get a decent film version. Here’s hoping.) I ended the list with Persuasion because it feels the most mature of all JA’s works and your reading of Austen will really end with a bang if you read it last. The protagonist, Anne Elliot, is older than any of the other heroines and the book has very autumnal themes. Anne’s not in the springtime of her life. She’s older, wiser, more mature, and has learned to be resigned to terrible disappointment. Her grace and strength make her one of the finest of Austen’s heroines. There’s not as much humor in Persuasion. Even the more comical situations (Anne’s father and sister Elizabeth’s vanity and her sister Mary’s hypochondriac tendencies) are so sad that they’re harder to laugh at than say, Mr. Rushworth or Mrs. Jennings.  But the characters are splendid and the plot is so satisfying!

So there you have it: the best way to introduce yourself to Miss Austen. But honestly, just promise me you’ll read them all. I’m not picky about the order.

Do you think there’s one novel that’s best for Austen newbies? Agree or disagree with my list? Let’s chat in the comments! Psst! Want more guidance about books that are good for the soul? I gotcha covered with this little labor of love that I put together for fellow bibliophiles! 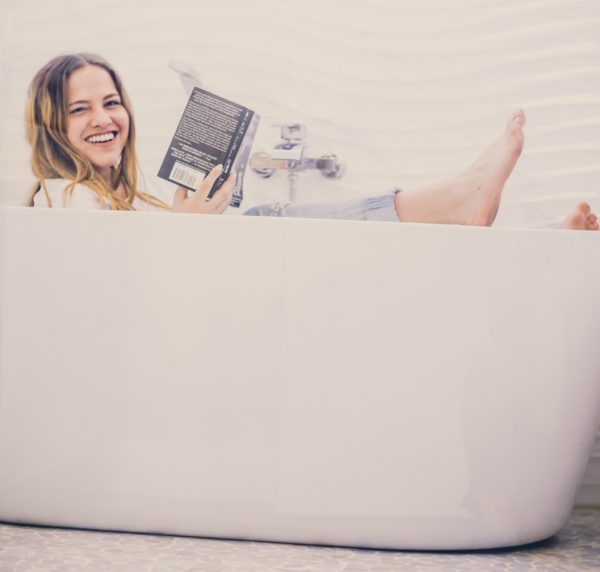 Vanessa who purchased the Literary Medicine Cabinet says, “This book is SO BEAUTIFUL. It is so well-written, clearly took so much thought and care, and the love put into it shines through. I thought it might be more like a printable, or a short list of books Haley enjoys (which would be awesome!) but this book is a multi-chapter guide for people who need books as soul-food. 110% worth it. It has already made my life a little bit better. Thank you for creating such quality content, Haley. I am loving it.”