So we’ve talked about how Marian doctrine taught me to celebrate my womanhood and how the Catholic idea of vocation honors women. But I want to share with you how learning about the saints and doctors of the Church taught me to love the diversity and strength of women in the communion of saints. 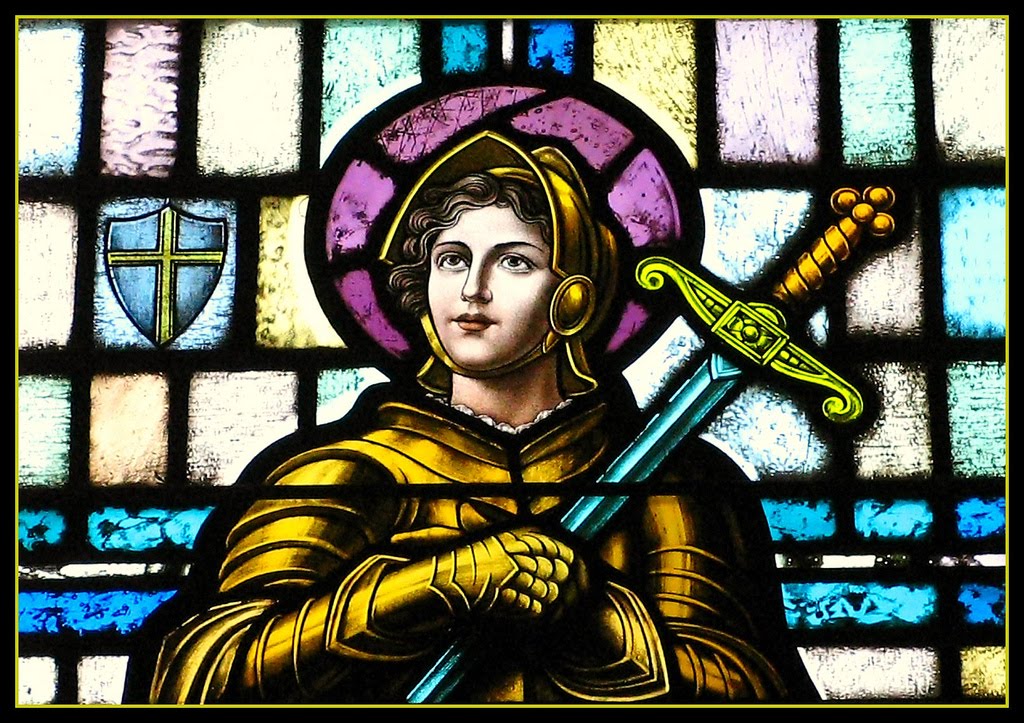 In Part II I shared how before converting to Catholicism, I felt that my gifts didn’t fit in anywhere in the church. It wasn’t until I started learning about the saints that I discovered that there is a place for everyone. Just because the Church teaches that men and women have different roles, that doesn’t mean that Catholic women are rigidly boxed into a narrow “type.” There are holy women that are completely different from each other and each Christian is called to display Christ’s love in a unique and beautiful way. If each of us were a stained glass window, we would have our own unique image to display the light of Christ.

So what kind of women are honored as saints of the Church?

There are warriors. St. Joan of Arc certainly didn’t fit into a traditional female role. Born a peasant, she was not a homemaker, mother, wife, or nun. She was a fearless military leader. Yet, she is held up as a model of Christian devotion. An interesting choice for a Church criticized for wanting all it’s women barefoot and pregnant in the kitchen.

There are mothers. A striking juxtaposition to St. Joan is St. Elizabeth Anne Seton, a fellow convert, loving wife and mother, and a lover of literature that was devoted to education and service. The first native-born American to be declared a saint! There’s also St. Monica, the holy mother of St. Augustine whose faithful prayers ushered him into the faith. Or St. Gwen, my confirmation saint, who gave birth to three saints, was kidnapped by Anglo-Saxon pagans, escaped twice, and was later martyred.

There are holy virgins. Take St. Lucy, for example, who fiercely defied being bullied into an unwanted marriage with a pagan Roman, undergoing the cruelest tortures her persecutors could imagine. She remained devoted to her Christian faith despite her torturers attempts to blind her, burn her, and send her to a brothel and was martyred for her faith.

No story is the same. No woman is the same. By holding up these amazing women for all Christians to emulate, the Church affirms that women are courageous, strong, persevering, faithful, intelligent, influential, and valuable.

Perhaps even more astonishing than the diversity of female saints, especially considering the inequality in education that women have encountered throughout history, there are four women who are named Doctors of the Church, a rare title that elevates their writings as greatly influential works that are helpful to the Church. To put this in perspective, there are only two popes who are named Doctors of the Church. I always thought that only folks like St. Thomas Aquinas, highly educated dead white guys, held that sort of honor. Not so. I think this speaks volumes to the respect the Church has for a woman’s mind. There’s certainly a higher percentage of women included here than I encountered in the texts studied in any of my Philosophy classes.

One of these amazing Doctors of the Church, St. Catherine of Siena, refused to accept the role her family had in mind for her: to marry well in medieval Italy. Instead, this holy woman devoted herself to a life of consecrated virginity. She was illiterate (until later in life when she was given the ability to read and write by supernatural means) but became the advisor of popes and political leaders. During a time of great turmoil for the Church, this strong and brave woman held great sway and blessed the Church with her holy guidance.

St. Therese of Lisieux, on the other hand, wasn’t a public figure by any stretch of the imagination and her desire was to serve God through “the little way” or the ordinary, every day tasks of one’s life. She lived a cloistered life and died very young of tuberculosis. Yet, the writings she left behind are honored next to those of popes and bishops. She is, in fact, the youngest of all the Doctors of the Church.

St. Hildegard of Bingen was a medieval abbess and a polymath, musician, poet, illuminator, philosopher, theologian, and visionary. During the era misnamed the “dark age,” St. Hildegard’s stunning intellect and writings shone with her vibrant faith. Even as a little girl, decades before my conversion, I was intrigued by St. Hildegard’s fascinating life and intelligence.

St. Teresa of Avila was a Carmelite nun, mystic,  and influential writer of the Counter Reformation era. Her great works, such as The Interior Castle, are prized for their insights on the contemplative life and mental prayer.

Warriors, mothers, martyrs, aristocrats, peasants, academics or illiterate, there is room for everyone. Getting to know the saints has given me a new perspective of a “woman’s role” in the Church. It is not narrow. It is not rigid. There is a place for everyone to be celebrated for the gifts God has given them and the unique way they can serve his Holy Church.

The end of this series, Part IV, on Church teachings about marriage, fertility, and contraception coming soon.