This is a series that I’ve been thinking about for months, but have been hesitant to dive into. Women and Catholicism is a hot button issue in so many circles. Story after story comes up on my news feed about how the Church oppresses women, discourages women’s rights, and promotes inequality between the sexes. According to media portrayals, the Church is stuck in the dark ages. “If only this hierarchy of men could get with the times!” is the common outcry.

And yet, to me, it all sounds so very strange because since embracing Catholic teaching, I have learned to celebrate my womanhood for the first time in my life, instead of treating it as a somewhat embarrassing obstacle to be overcome.  I think this has a lot to do with Catholic teaching on the Blessed Virgin Mary, vocations, the communion of saints, and fertility. So here’s Part I of this little series, starting with Our Lady. 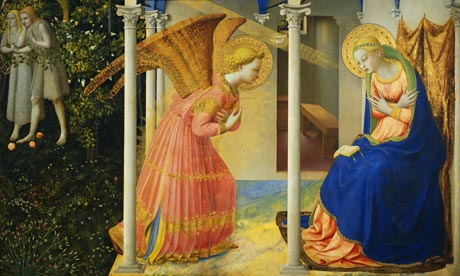 Part I: The Blessed Virgin Mary (Because the Best Christian Ever is a Woman)

It is startling to me that Catholics are perceived as having a negative view of women when Our Lady is so highly honored. In the Catholic faith, The Blessed Virgin Mary is the most exalted of all Christians, she is the first Christian. Worship is reserved for the Holy Trinity alone. But Catholics honor and venerate Our Lady above all other saints.

Oftentimes, it seems that our culture celebrates women who “rise above” their female state. “Look what she accomplished even though she was a woman!” we’ll say, as if being a woman is a handicap or disability to be overcome. We don’t often praise women for being uniquely feminine, perhaps because we don’t hold femininity in high regard.

We don’t honor Our Lady because she overcame her unfortunate plight to be born a woman, but because she did what no man could ever do. Her humility, grace, maternal love, faithfulness, tenderness, strength, steadfastness, and sacrifice contribute to her glory. I’m reminded of Eowyn in Tolkien’s Lord of the Rings. She doesn’t save the day in spite of being a woman, she conquers because she is a woman: “But no living man am I! You look upon a woman.” It is the second Eve that has the power to crush the serpent under her heel, not in spite of her womanhood, but because of it.

There is simply nothing comparable in Protestant life. I truly think that the Protestant avoidance of Mary as well as suppression of Marian doctrine significantly contribute to the experience I, and many women, encounter in the Protestant church. We feel like second-class citizens. When you grow up hearing of Eve’s fall and never understand that Mary is the New Eve who rights the wrongs, opens the gate, and carries our Hope, it’s easy to feel that being a woman is cursed and not blessed.

Doctrines such as the teaching that Mary is the Theotokos, or God-bearer, contribute to a celebration and exaltation of womanhood. Growing up Protestant, I was often told that Mary was the mother of Jesus, not the mother of God. This is a form of adoptionism (the heresy teaching that there was a merely human Jesus that was later adopted as God’s son) and not Orthodox Christian teaching which is that at his conception, Christ was fully God and fully man.

By emphasizing that Our Lady is the Mother of God, the Church not only maintains a high Christology (highlighting that Christ was always divine), but also makes the shocking assertion that God himself chose to dwell in a woman’s body as his abode for nine months. Perhaps even more scandalous is the emphasis the Church Fathers place on Christ being born of Mary, not merely from Mary. By this they meant that God allowed his very body to be created from Mary’s womb. God chose a plan of redemption in his Incarnation that honors all women.

Furthermore, this plan of redemption was not forced on Our Lady by God. The Incarnation hinges on Mary’s willingness to allow God to enter her womb: Let it be unto me according to your word, she says to Gabriel. In a sense, the redemption of the world spins on her answer, the answer of a woman. Because her answer is a faithful yes to God’s will, the Blessed Virgin is the example for all Christians. We must all say “yes” to God’s desire to dwell in us. In this metaphor, the Christian is taking on a feminine role. In Mary’s case, it was due in part to her literal femininity that it was possible for her to be the God-bearer.

My growing understanding of Marian doctrine makes me joyful that I was born a woman and causes me to celebrate the God-given gift of my womanhood.

(You can continue to Part II  or the rest of the series.)