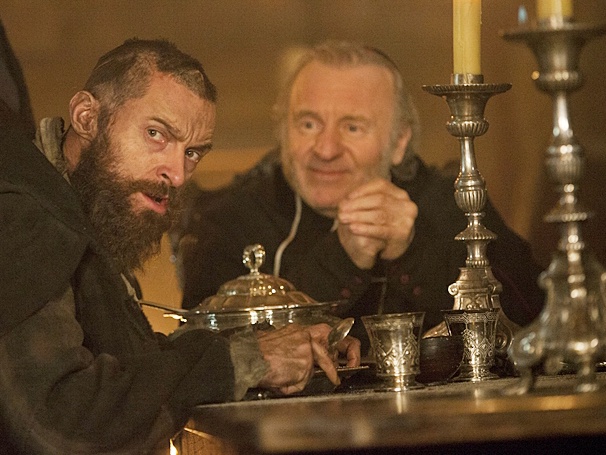 Have you seen the new film adaption of the musical version of Les Miserables? Les Mis has been a part of my life since I was a little girl and my family would listen to the musical on long car trips. My sweet mother (who hates big cities) actually took me to NYC so that we could see it performed on Broadway, and I read Victor Hugo’s novel when I was still far too young to grasp more than the plotline. To illustrate how much I love Les Mis, my husband and I actually went to the movies to see it (I know! Wonders never cease!).

(SPOILERS WITHIN! YE HAVE BEEN WARNED!)

When people have asked me, “so, what’s that movie about?” I find it difficult to answer them. “Well…there’s this man, Jean Valjean who steals a piece of bread and…well, it’s about a political revolution led by these students…or erm, it’s about a woman forced into prostitution in order to provide for her daughter…it’s about a police inspector who becomes obsessed with tracking down one man…” There is so much to say. And yet, as I struggled to articulate the complicated plot, I realized that the story is really quite simple: it’s about a bishop who loves others with Christ’s love, participating in the great work of God’s grace and redemption. There it is. The whole story.

The Bishop of Digne sees a starving, homeless ex-convict (Jean Valjean) and treats him like he would treat Jesus, as an honored guest, by offering food, shelter, and mercy when Valjean steals valuables from the bishop’s household in the night.  Instead of pressing charges, the bishop offers Valjean the silver he stole as a gift so that the penniless man can start a new life. Les Mis is the story of how the bishop’s faithful act of charity to Valjean allows God’s grace to flow through the life of the formerly wayward man into the lives of so many other people creating a series of tiny or huge redemptions:. It’s about one person acting like we are all called to act. And that is the real revolution in the story. This revolution of grace.

I think we are often very aware of the effects of an evil act and how the pain ripples out affecting many more than were directly involved in the crime. There’s a chilling song by Sufjan Stevens about John Wayne Gacy, Jr., a serial killer. The lyrics say,  “He killed 10,000 people/ with a sleight of his hand.” And although Gacy killed several people, not thousands, we know what Stevens means. The grief of those murders touches the victims parents, siblings, neighbors, friends. It’s as if with each of those atrocious acts, there is not one death, but hundreds, thousands. Just as we see the waves of grief and destruction following a horrific act like the recent Sandy Hook shootings, this ripple-effect can work in the opposite direction. If we participate in God’s goodness and grace by showing Christ’s love to those around us, his grace flows in directions we may never see and ways we could never predict.

I think it is that truth that permeates Les Miserables. By offering grace to Jean Valjean, the bishop showed him the love of Christ and it is that same love which transforms him into the sort of man who would provide dignity and medical care for Fantine, a dying prostitute, adopt her daughter, Cosette, and rescue her from child abuse and neglect, save the life of a young revolutionary, and create jobs and livelihood for an entire community. The bishop never sees Valjean again (until the closing scene when he and Fantine usher Valjean to heaven) and so would not have known the grand effect of his act of mercy.

This story of God’s grace, it’s not just the plot of Les Mis. It’s THE STORY, the cosmic tale. The story that we are all given the chance to be a part of. I think that’s what makes it so timeless, beautiful, heartbreaking, and inspiring.

A few notes on the film:

Overall, the casting was great. Hugh Jackman knocks himself out to play Jean Valjean. I thought he was splendid. Anne Hathaway is remarkable as Fantine. She isn’t one of my favorite actors and I was honestly disappointed when I heard she was cast, but she completely won me over and I have to admit that her performance of “I Dreamed a Dream” was the absolute highlight of the film. Spectacular! Eddie Redmayne is wonderful as Marius, Helena Bonham Carter and Sasha Baron Cohen are thoroughly despicable as Madame and Monseiour Thernardier, and it was delightful to see Colm Wilkinson (one of the original Jean Valjeans of the stage production) as the Bishop. Amanda Seyfried was decent as Cosette, although somewhat forgettable,  and Samantha Barks, who plays Eponine has a stunning voice. The real disappointment was Russell Crowe’s portrayal of Javert. Although his acting wasn’t awful, he didn’t seem to be able to sing AND act at the same time. His vocal performances lacked any kind of emotion and, to be honest, you start wondering when he’s going to jump already.  But apart from too many close-ups (does all of “On My Own” have to be shot close enough to show us the pores in Eponine’s nose?), I have few complaints. One difficult scene I think they really succeeded with was “Lovely Ladies,” the song sung about/by the prostitutes as you see Fantine’s desperation to survive and provide for her young child. Some of the stage productions I’ve seen of Les Mis have made the raunchy song almost upbeat and comical, as if there’s something a little funny about prostitution. But the film really makes it, well, scary. The poor women are emaciated and miserable. The scene is dark and gloomy and really portrays the hideousness of the situation. And Fantine’s agony is absolutely heartbreaking. The use of light throughout the film was very well done. There is scene upon scene with candles illuminating crucifixes and the film never shies away from the undeniable Christian themes of the story.

If you haven’t seen it, I highly recommend a trip to the theatre to see Les Miserables. Keep in mind that it has mature content and would not be appropriate for young children. If you have seen it, what did you think? I’d love to hear your take on the film! One of my reading goals for 2013 is to read Hugo’s novel, the giant unabridged version. Is anybody with me?