Welcome to the second Miniseries Monday! I’m Ellie, Haley is my best friend, and we love each other partly because of and through our mutual love of miniseries. And musicals. We also love musicals. We discussed it and decided that Miniseries Monday would be pretty loosely arranged. Last time we did a comparison between three versions of Jane Eyre. Two were feature films, and only one was a miniseries. This week we are going to do something similar, with the great Jane Austen classic, Emma. Haley will be adding her thoughts in here and there.

Emma may not be my favorite Jane Austin novel (it’s right in the middle of the pack for me) but it has had three really great reincarnations on the screen. (Disclaimer: there is a 240 minute version of Emma that came out in 1972 that I have not seen.)

Haley:  I love Austen’s Emma. Mr. Knightley is my absolute favorite Austen hero. He doesn’t save the heroine’s family from ruin like Mr. Darcy. He doesn’t do anything particularly big or grand. He’s just a wonderful, kind, and good man. He does what’s right over and over again each and every day. He always puts others before himself. And loving such a man transforms selfish Emma into a real woman. Great story. Great characters.

In 1996 there were two versions of Emma made. The more famous stars Gwyneth Paltrow and Jeremy Northam. The other was an A&E made-for-TV movie staring a 23 year old Kate Beckinsale and a 33 year old Mark Strong.

Lets talk about them! 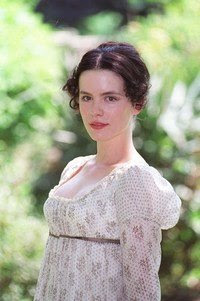 Kate Beckinsale: Honestly? I don’t remember anything about Kate as Emma. And I watched this movie pretty recently. Haley, you want to weigh in here?

Haley: I agree. I actually own this film and I’ve only watched it once. I generally like Kate Beckinsale and it’s not that she ruins the role, she’s just incredibly forgettable. 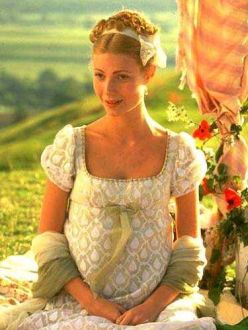 Gwyneth Paltrow: Gwyneth makes a good Emma for a feature film, where they have to shorten and chop up the story. Her Emma is simplified to a silly, self centered, rich girl. She’s pretty and simple and vain.

Haley: Definitely simplified. But I can’t help but like Gwyneth’s Emma. It might be partly due to shallow things like how wonderful her costumes and hair are. Gwyneth has great chemistry with the rest of the cast, though.

Romola Garai: This is the first time I have actually liked Emma as a person and understood why someone as down-to-earth and wonderful as Mrs. Weston would love her so much and have such faith in her. Romola plays her so well, with a lot of true remorse for her silliness, and real caring for her family.

Mark Strong: I have a major Mark Strong aversion. I don’t think there is anything particularly wrong with him, he just seems to be everywhere all the time, and I’m sick of him. And he has a snaggle-tooth. And I hate him.

Haley: I didn’t like him in this role at all. But I think it’s because I usually see him playing villains (for example, in Stardust and the new Sherlock Holmes) and just couldn’t see him as Knightley. I kept worrying that he had some sinister plot brewing.

Jeremy Northam: He is a wonderful Knightley, a classic English actor, who could play almost any Austen hero with aplomb. I think he is so handsome and I love him. 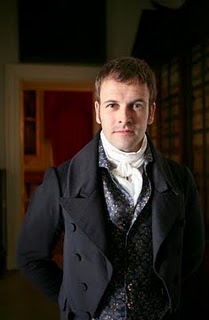 Jonny Lee Miller: Has been one of my favorite actors since Hackers. To see him as Mr. Knightley made me a little sad, since it means that he’s getting old, but I think he plays the role so well.

Haley: I LOVED him as Mr. Knightley! Although Northam is splendid, I have to say that Jonny Lee Miller is my favorite Knightley.

A&E: This version is nothing special. It has a smaller budget than the Hollywood version (obvi), and other than Kate being better then Gwyneth, there isn’t any real reason to watch this one instead of the Hollywood one.

1996: I am not a huge Gwyneth fan, and as my husband pointed out, Ewan McGregor is more memorable as Frank Churchill than Jeremy Northam is as Knightley. It seems to miss the whole point of Emma. Gwyneth seems smug and bratty, rather than good intentioned although oblivious. She doesn’t seem truly contrite.

Haley: Yes. It’s an enjoyable feature film, but due to time constraints they have to simplify so much. There are some fantastic moments but you really miss out on any richness to Jane Fairfax’s character and Gwyneth as Emma (although lovely) doesn’t really capture her.

BBC: It is a little languid in its filming. Long, drawn out shots of English country-side. Which I love. So, no real complaints here.

Haley: Loved it, loved it, loved it.  My only complaint is that Laura Linney introduces this BBC Masterpiece Theatre version on the DVD I have and I’m annoyed every time that they didn’t get somebody British to introduce it. I don’t know why it bugs me so much. It’s not even part of the movie!

A&E: Kate Beckinsale is not Gwyneth Paltrow. Points to A&E.

1996: Ewan McGregor as Frank Churchill. Especially when he sings. And that wonderful scene where Emma’s carriage is stuck in the water and Frank says, “Well, you’ll just have to live there, I suppose.” Hilarity.

Haley: Don’t forget his ridiculous hair! There are really so many great comedic moments in this film. Toni Colette is a hysterically funny Harriet Smith and Juliet Stevenson as Mrs. Elton is amazing. And I love Miss Bates in this version. “PORK, mother!” The Box Hill scene when Emma insults Miss Bates is really well done. It’s so awkward and painful and Mr. Knightley’s attempt to console Miss Bates is so noble and kind.

BBC: Romola Garai. Period. Jonny Lee Miller. Period. Also, that incredibly moving and gut-wrenching scene in the beginning where Jane Fairfax and Frank Churchill are sent away as children is beautiful. Baby Jane is the prettiest little girl.

Haley: Yes! I get teary-eyed at the beginning every single time. Great supporting cast, too. Michael Gambon is a such a lovable Mr. Woodhouse. I also find Jane Fairfax such an endearing character in this adaption. The banter between Emma and Knightley is wonderful and really helps their romance “make sense.” Like Ellie said, Romola Garai really does a great job of keeping Emma likable. I want to watch it right now.

What do you think? Have you seen a version of Emma that you really love? That you really despise? Give us your thoughts in the comments!